Thanks to a generous sponsor, qTox development gets founded for a year! Anthony Bilinski got funded to work full-time for a year and sphaerophoria part-time for a few months. You can read more about this in qTox’s blog post, where Anthony goes into detail on his plans for the year.

We would like to thank a cloud hosting company DigitalOcean for sponsoring the Tox project as part of their program for sponsoring open source projects.

DigitalOcean has been providing us with reliable cloud server infrastructure for free since July 2015 — for over 6 years now! They have been very generous with supporting us and a pleasure to work with. Just as an example, in 2018 we asked them for a seemingly outrageous $660 in credits as a budget for that year, which they provided us without any questions asked.

Most of our infrastructure is running on DigitalOcean, including our website, wiki, blog, bootstrap node list, mailing list, some of CI/build system cache, as well as the tox.chat domain — it’s using DigitalOcean as a name server.

In the past we have also hosted a package repository for Debian, Ubuntu, CentOS, Fedora and F-Droid, as well as a Jenkins instance for our CI, on DigitalOcean.

DigitalOcean has renewed our sponsorship for 2022, so we will be using their services in 2022 too.

Rest assured, Tox the protocol doesn’t depend on any central servers in order to work, so even if all of our servers were to go down, you would still be able to use Tox.

A stack-based buffer overflow vulnerability was discovered in Toxcore’s networking code that allows a remote attacker to crash the Toxcore process or potentially execute arbitrary code by sending a specially crafted packet. The vulnerability was assigned CVE-2021-44847 identifier.

All users of Toxcore that don’t have UDP disabled are affected. An attacker, knowing the target’s DHT public key, IP and port, can easily craft a packet exploiting the vulnerability. DHT public key, IP and port are all public information, publicly available on the DHT, so an attacker can target any and all Toxcore users by scraping this information from the DHT. This attack can also be used to target DHT bootstrap nodes, thus making new users unable to connect to the DHT network.

We urge everyone to update to Toxcore 0.2.13 as soon as possible.

The buffer being overflown is temp in the handle_request() function, located at DHT.c:365 in Toxcore 0.2.12. The overflow happens on the following line, a few stack frames inside the decrypt_data() function call, due to the 5th argument of decrypt_data() being incorrectly calculated. The 5th argument, length – CRYPTO_SIZE, incorrectly expands to length – 1 + 32 * 2 + 24, when the intention was for it to expand to length – (1 + 32 * 2 + 24). This allows decrypt_data() to write more data into temp buffer than intended, overflowing the buffer and writing past handle_request() function’s stack frame, smashing the stack.

Due to the recent takeover of Freenode IRC[1] and Tox IRC channels being hostilely taken over by the new Freenode staff without any prior notice[2], we have moved our IRC presence to Libera Chat IRC[3]. All Tox IRC channels have moved to Libera. Any Tox channel you see on Freenode (or any other network) is not official. You can see the up-to-date list of our IRC channels on the wiki[4].

Libera Chat is run by the staff that ran Freenode before it got taken over[22]. It’s the continuation of Freenode, with the the same staff, rules, IRC services and many of the same projects. Tox has been on Freenode for almost 8 years, since its very inception in June 2013, and many Tox developers had been using Freenode even before that. It saddens us to have to part with Freenode, even if just in name, and we are grateful to its former staff for managing it for us for such a long time and to Freenode’s sponsors for keeping the lights on. We hope that Libera becomes the new IRC network of choice for open source projects like Freenode once was.

See you on Libera Chat! 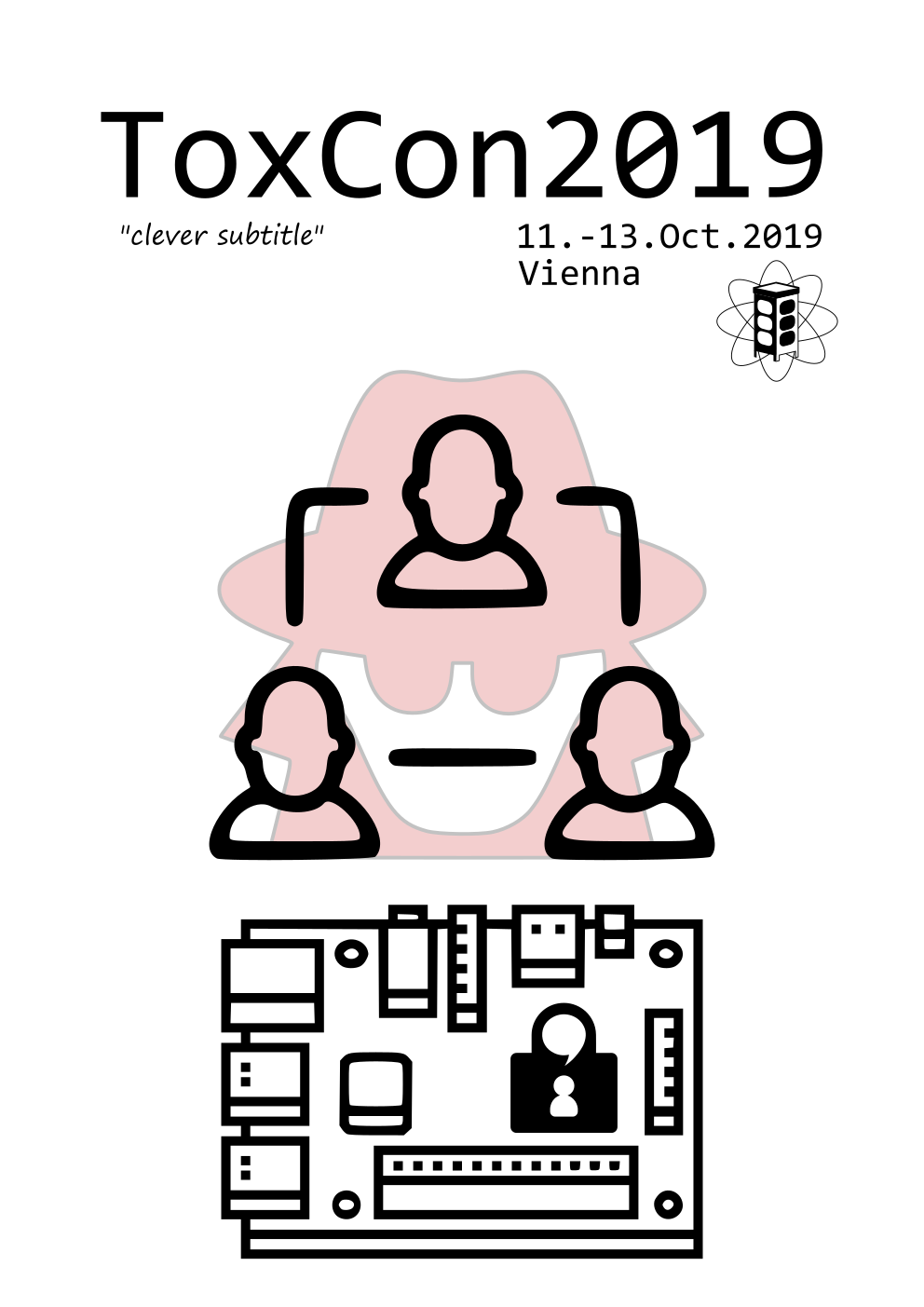 This October the Tox developer community will be holding its third annual conference at Metalab in the heart of Vienna, Austria. The event will be 3 full days, from Friday, October 11th to Sunday, October 13th.

We will talk about Tox, and other security related and interesting topics. If you would like to attend, meet the Tox devs, do some live hacking, or just socialize — get a free ticket and reserve a T-shirt. You can find the exact address on your ticket.

Want to give a talk about your project? Please apply here!

If you have any questions about booking, travel arrangements, talks, or anything related to the event, join #toxcon IRC channel on Freenode and contact robinli, strfry or zoff99.

This year’s ToxCon was super fun, thanks to everyone who attended it!

If you have missed the event, list of talks, talk slides and some photos from the event are available online. No videos are available as it was decided not to record the talks.

We are planning to hold another ToxCon the next year, so keep an eye for announcements. If you are working on anything fun with Tox and want to share it with the world, consider giving a talk at the next ToxCon — we would be happy to host your talk.

Here are a couple of the photos from the event.

A memory leak bug was discovered in Toxcore that can be triggered remotely to exhaust one’s system memory, resulting in a denial of service attack. The bug is present in the TCP Server module of Toxcore and therefore it affects mostly bootstrap nodes. Regular Tox clients generally have the TCP Server functionality disabled by default, leaving them unaffected.

If you are using TokTok c-toxcore v0.2.8, you should be unaffected by this bug.

If you are running a bootstrap node, we strongly encourage you to update to TokTok c-toxcore v0.2.8 rather than disable the TCP Server option. In fact, we will be making Toxcore v0.2.8 the minimal required version for all of the nodes on our bootstrap node list. TCP relay functionality is very useful for mobile users and those behind restrictive NATs, and given that it’s mostly bootstrap nodes that act as TCP relay servers, as clients generally have that option disabled, even a few of those nodes disabling TCP Server functionality would reduce the number of TCP relay servers Tox clients can use considerably. 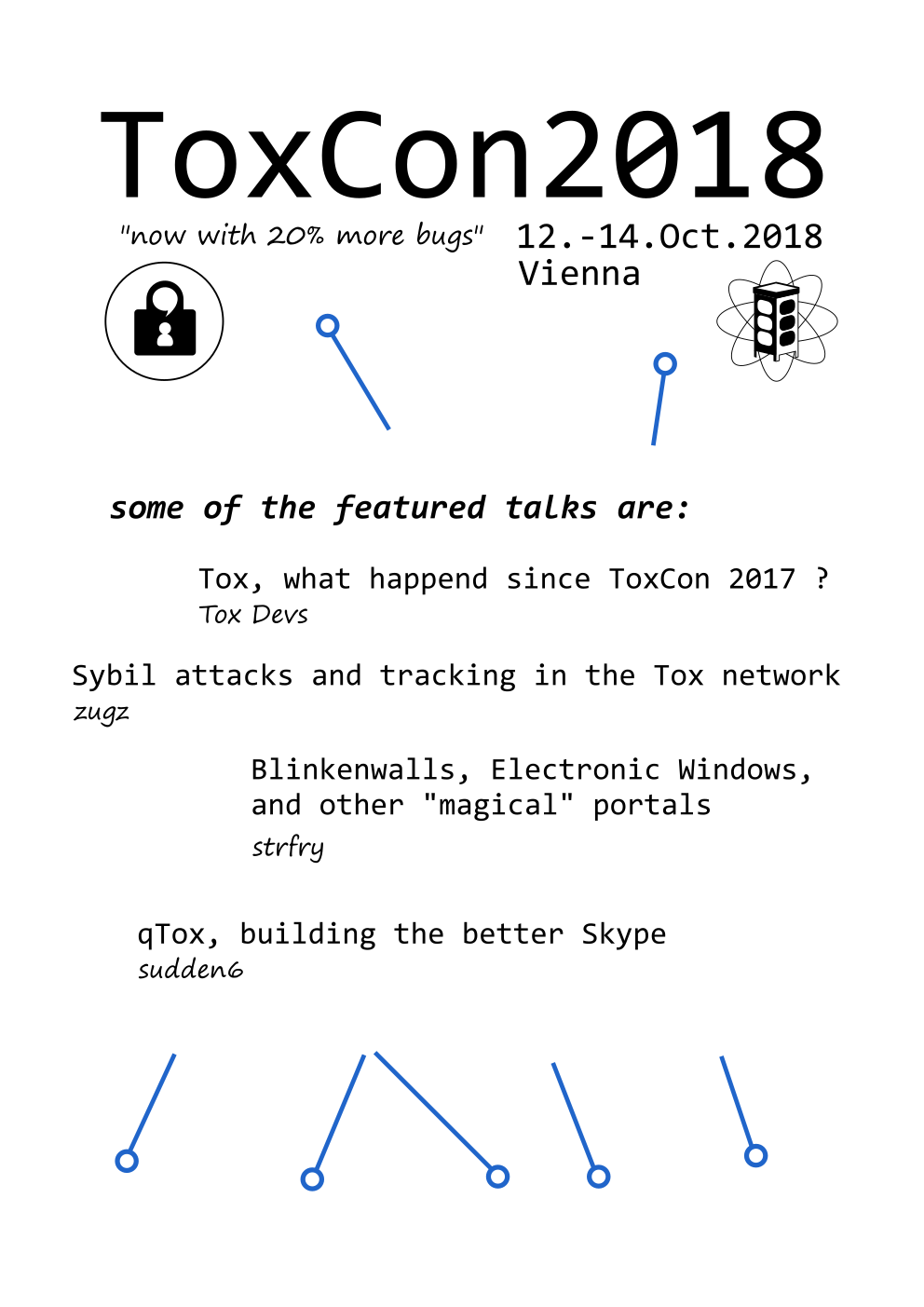 As promised, here is more information on ToxCon 2018.

Tox developer community will be holding the conference from Friday, October 12th, to Sunday, October 14th — a 3 day event, at Metalab Vienna, a hackerspace located in the heart of Vienna, Austria. We have many talks prepared for you: from the progress Tox has made in the last 12 months, to security-related and other interesting topics. The the full schedule of the event is available online and there is also an Android app that you can use to get updates if more talks get added.

If you would like to learn more about Tox, meet the developers, do some live hacking, or just socialize, then this is the event for you. The tickets are free and you have an option to buy a sponsored ticket or a ToxCon T-shirt. All money from the sponsored tickets and the T-shirt sales will go towards a dinner for the speakers, and, if there is money left, T-shirts to give away.

For questions about booking, travel arrangements, talks, or anything related to the event feel free to join the #toxcon2018 IRC channel on Freenode and contact one of the event organizers: robinli, sudden6 or zoff99. 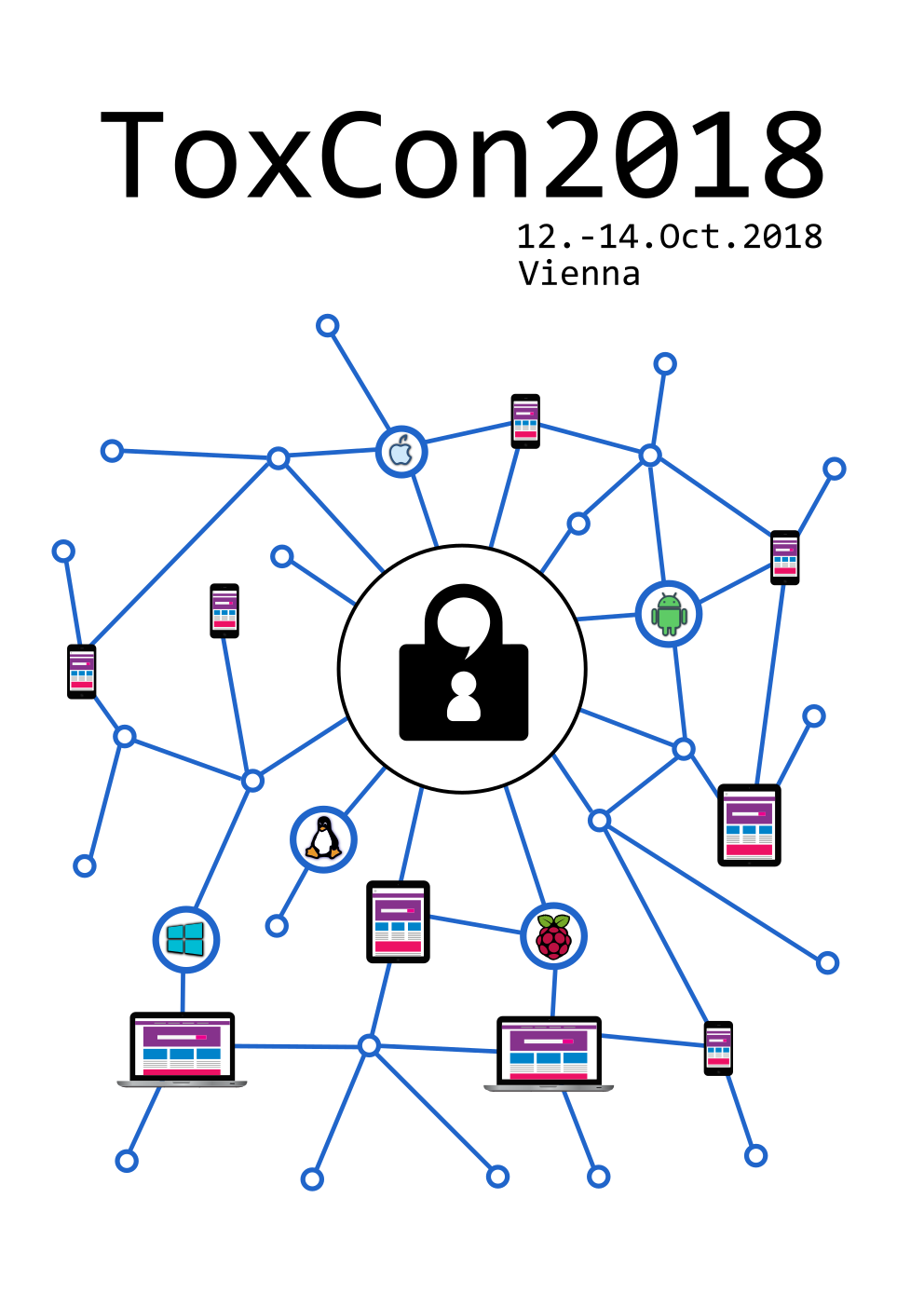 In October the Tox developer community will be holding a conference in Vienna. Join us as we talk about the progress we have made during the last 12 months with Tox and other security related topics. There will be lots of talks and other cool things to see.

For more details join the #toxcon2018 IRC channel on Freenode and contact robinli, sudden6 or zoff99.

More information will be revealed in a future post.

A vulnerability was discovered in Toxcore that allows one to learn the IP of a target user by only knowing their Tox Id and without being friends with the target user.

The Tox protocol is designed in such a way that only friends (contacts) which you have accepted friend requests of are able to learn your IP based on your Tox Id and no one else. Thus, being able to learn the IP of an owner of a Tox Id without them accepting a friend request is an undesired behavior.

We urge everyone to update to the latest TokTok c-toxcore as soon as possible. You can immediately mitigate the vulnerability for yourself by using TCP-only mode.

Details of the vulnerability

Here are the technical details of the vulnerability.

The vulnerability is caused by the Onion module of Toxcore erroneously allowing to onion-route any data, any Tox packets, without a restriction. By the Tox protocol specification, when Alice makes an onion-routed request to Bob and then Bob sends an onion-routed response back to Alice, the payload of the onion-routed response sent by Bob arrives to Alice as it is, stripped of any identification that it was ever onion-routed by the last onion hop, and is interpreted as a regular Tox packet by Alice. Alice has no way to distinguish onion and non-onion packets — she has no idea if the packet originated from the node it received the packet from, or if the packet was relayed on someone else’s behalf as part of an onion-routing. The way the onion routing is defined in the Tox specification and Toxcore erroneously not restricting the packets that can be onion-routed allows for some interesting interactions that weren’t meant to happen.

Because there are only 3 nodes in the onion path, the source and destination excluded, the patch protects you as long as at least one of the three is using the patched Toxcore.

This vulnerability affects only the UDP mode. In TCP-only mode the Onion module restricts which Tox packets are onion-routed correctly, and the Tox protocol specification is written in such a way that nodes using TCP-only mode can distinguish between onion and non-onion packets. So all of the above applies only to the UDP mode.